There’s a general rule in business and life that if someone’s winning, someone else is losing.

If you consider the used vehicle market so far in 2021, I think most everyone would agree that the winners are those with cars to sell. Dealers retailing used vehicles have seen phenomenal growth in front-end grosses and overall used vehicle department profitability due to the tailwinds of solid demand, retail price growth and limited selection/supply.

Consumer sellers have fared well, too. Broadly speaking, their vehicles are worth more, and they’re getting it when they choose to sell their vehicles to dealers or other entities. Many consumers have realized the “extra” car that’s been sitting in their driveway is a potential money-maker.

On the flip side, I’d submit that if used vehicle sellers have been winners in this year’s market, used vehicle buyers have been the losers. By “buyers,” I’m not talking about dealers who have had to pay historically high prices for wholesale vehicles. True, these cars may not have produced the front-end gross profits you’d like, and some produced losses, dealers generally made a profit, if only in F&I and service.

No, it’s becoming clear that the buyers who have lost the most in this year’s used vehicle marketplace are consumers, who have been paying historically high retail prices for used cars. In short, their buying power—both in terms of what they are required to pay to own a used vehicle and the type of vehicle they can purchase for higher prices—has suffered.

Average down payments are up: If you average the 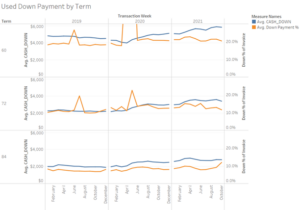 down payments consumers are making to finance used vehicles for 60-, 72- and 84-month terms, the overall average down payment has increased since 2019, from around $2,000 to $2,800. The chart at right shows how down payments have changed across different loan terms. 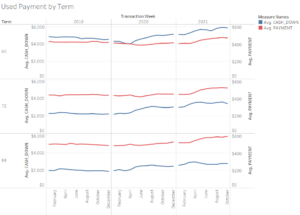 month for a 60-month loan, and $46 per month for a 72-month loan. The chart at right shows how increases in monthly payments are up, even when loans get extended to 84 months. If you’re wondering why monthly payments have gone up in an environment where interest rates across 60- and 72-month loan terms have decreased in the past two years, the answer rests in the ever-higher loan amounts consumers are financing. The data shows that the amounts financed for 60- and 72-month loans have increased roughly 8 percent and 15 percent, respectively, for both the Prime and Super Prime credit tiers.

I’m sharing this dive into used vehicle financing data because I think it points to a broader issue that dealers and used vehicle managers should be aware of—that we’re seeing increased pressure on the ability of consumers to afford the vehicles we’re trying to sell them. This is not to say that consumers can’t currently buy cars. Economists point to a record-high $4.1 trillion in as-yet untapped household savings across the country and a healthy credit market that remains willing to finance older cars at higher prices and longer terms. Both stand as evidence that used vehicle affordability has not dipped into a danger zone.

Still, I don’t think anyone would disagree that while the go-go used vehicle market has been a boon for dealers, it’s diminished the buying power for consumers we serve.

The post A Look at Winners and Losers in the Current Used Vehicle Market appeared first on Dale Pollak.